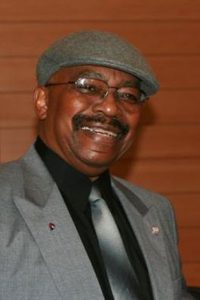 I was born in Chicago, Illinois on September 9, 1937. My parents, James Jr. and Gladys were from Lake Charles, LA and Princeton, KY respectively. I was the first of six children, and attended Secondary schools in the Chicago system. I graduated from David G. Farragut High School on Chicago’s west side in 1955 and immediately enlisted in the U.S. Navy. My Mom and Dad struggled to keep me in school because I knew that there were ships out there with my name on the crews list and I was anxious to join them. I was fortunate in that I was accepted into the Submarine Force and began a love affair that exists even now. As a youth during WWII I was captivated by tales of the super-human efforts of American Submariners to destroy the Japanese Navy.

Most of my early career was spent on the East Coast and in Scotland. While in Scotland I convinced a young Lady named Ann that her future would best be spent married to me. For almost fifty years she has waited for the other shoe to drop. I was promoted to Warrant Officer in 1966 and never again went to sea in the Atlantic. After several tours; Fleet Tugs. Aircraft Carriers, and various Amphibious Ships, in 1981 I ended up in the Pacific Northwest at Keyport, Washington. In 1982 the Henry family moved into a small, quaint, town called Poulsbo. I had orders to transfer to London, England in 1985 but, by then my wife and our children, Donna, Shona and Iain, had all dug in and none of them wanted to go with Dad. I retired from the Navy in April 1986.

In 1991, I was invited by “Mitch” Mitchison to join the Poulsbo Planning Commission, a task I thoroughly enjoyed. Nine years later, I was appointed to the City Council. I entered politics totally without a real agenda. Of course I have one now! I love having personal contacts with my constituents. The personal aspects are what a politician should be about. When it stops being fun I am out of here.