For more information or questions on projects not listed here, please contact the Engineering Department at 360-394-9882 or send inquires to publicworks@cityofpoulsbo.comcreate new email.

The City of Poulsbo, in collaboration with the Washington State Department of Transportation (WSDOT) and Kitsap County, is moving forward with the start of construction on improvements at the intersection of Johnson Way and SR305. The City Council authorized the award of the contract to ACI-Active Construction Inc., on June 10, 2020. Construction began mid-January 2021. This project will improve traffic mobility and provide safer access to SR305 with the construction of a roundabout at the new intersection of Johnson Road and a non-motorized tunnel crossing at SR305. A newly constructed road, Johnson Parkway, will be created by realigning the south segment of Noll Road ¼ mile south of Poulsbo Elementary School to the newly constructed roundabout at SR305. The project is expected to be completed within a year and a half of construction start. For more details, visit the opens in a new windowproject page. 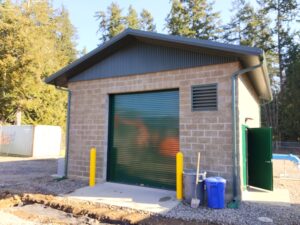 This project will add a manganese treatment facility to the Westside Well. Manganese is a naturally occurring element common in wells around the Puget Sound. While it  does not pose a health concern, it does have negative aesthetic qualities. The treatment facility will remove manganese from the water supply at the source. Construction is nearly complete on this project and the treatment portion of the facility is currently operational.

This corridor improvement will connect SR305 to NE Lincoln Road via Noll Road, Languanet Lane and Maranatha Road. The improvements will include street lighting, sidewalks, and shared use path improvements throughout the corridor. The broader Noll Road Corridor Improvements is being broke into a compilation of smaller projects. The City applied for funding in March 2020 for completion of the north segment, Languanet Lane. The south segment project will realign Noll Road from ¼ mile south of Poulsbo Elementary School to SR305 (new roadway Johnson Parkway). It will also include a roundabout at the new intersection of SR 305 and Johnson Road. The right of way acquisition process for the south segment is complete and construction completion expected late summer 2022.

This project is currently in the design phase and the City anticipates bidding in April 2022 with construction expected summer or fall 2022. This project will install a concrete tank adjacent to SR305 which will be used to prevent sewer overflows during peak rainfall events. As part of construction, a retaining wall, tank, diversion structure, and associated piping will be installed.

This project is currently in the design phase and the City anticipates bidding in April 2022 with construction expected summer or fall 2022. The project will upgrade and replace 2 existing PRV vaults. These vaults are pressure reducing valves located between different water pressure zones within the City. This allows water to flow between pressure zones during summer months as well as provide adequate fire flow to all zones in the event of an emergency.

West Poulsbo Stormwater Retrofit: The City received a grant from the Department of Ecology to design stormwater retrofits for the West Poulsbo area. This includes Viking Avenue and Finn Hill, areas that were developed before current water quality standards. The proposed design will treat about 75 acres of area to enhanced water quality standards through the installation of a series of bioretention cells prior to stormwater being discharged to Liberty Bay. This project has a relatively low cost per treatment area and the benefit provided makes it an attractive Ecology grant funded construction project. Currently the design is being reviewed by Department of Ecology and the city anticipates seeking grant funding in the near future.

Liberty Bay Waterfront Trail
This project will extend trails in American Legion Park to the existing trail system in Fish Park. Feasibility studies and pre-design work on this project are ongoing. The viability of the project is promising and the City anticipates more forward progress on this project in the coming months. 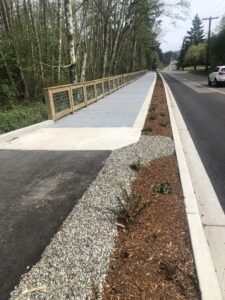 This project constructed a bioretention swale on Fjord Drive near the Poulsbo Yacht Club and 6th Ave, as well as a stormwater treatment vault at the Poulsbo Middle School campus. 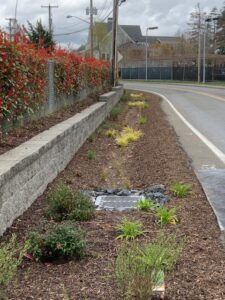 Forest Rock Lane, an important neighborhood collector in our City Network, was built 20 years ago and is in need of an upgrade.  Steepness of the road, subsurface water flow, road base and asphalt thickness have all been contributing factors to condition of the road.  This project will rebuild the road base, install trench drains, and thicker asphalt to improve the road. The road will be upgraded from the Central Market entrance to Caldart Avenue.

This is the first Full Depth Reclamation type of project for the City. The existing road and base is pulverized and used to build the new road section on top of it.  This means the project reuses material, reduces the work and material required by the contractor and shortens the duration of the project.   The project will also include drainage enhancements, ADA upgrades, installation of a radar speed sign, and channelization of the road to slow down traffic. This project was completed in August 2019.

As part of the City operations, sanitary sewer lines and manholes are maintained and replaced when they have reached the end of their useful lifetime. There are areas of the City with old sewer which has a history of issues including root intrusion, degraded pipe, and groundwater infiltration. The City has developed two sewer rehabilitation projects to extend the life of these existing sewers without needing to fully replace the sewer.

Last winter the City successfully completed phase 1 of the Central Interceptor Rehabilitation project which included re-lining the main sewer trunkline leaving the City along SR305. The second phase of this project is to rehab the manholes by cleaning, grouting, and sealing to prevent degradation and groundwater infiltration. This project extends between Tollefson along SR305 to Johnson Road, and along Johnson Rd through undeveloped property to the Deer Run neighborhood. Thirty five sewer manholes were rehabilitated as part of this project. This project was completed in 2019.

Concrete sewers in the vicinity of Raab Park, Swanson Way NE, and 11th Ave NE were lined with Cured In Place Pipe or CIPP Lining. The idea is to slip a liner into the existing sewer, expand it, and cure it in place thereby creating a pipe within a pipe. The newer pipe is stronger and protects from groundwater and root intrusion as well as reduces joints and other areas that can potentially cause sewer backups. This lining method is also known as trenchless sewer repair as it is does not require the street to be torn up to replace the existing sewer.

The CIPP Lining Project lined approximately 1,860 linear feet of concrete pipe on 11th Avenue, Raab Park, and Swanson Way. Residences in this neighborhood will be affected by this project for a short time and will be notified in advance of the work. A sewer service interruption will be required from some residents in order to complete the project and avoid sewer backups. This project was completed in 2019.